The Swan Princess Wiki
Register
Don't have an account?
Sign In
Advertisement
in: Monsters, Male Characters, Villain,
and 10 more 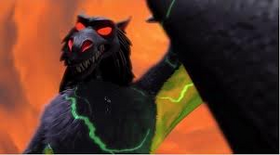 The Great Animal is a hybrid animal and the main antagonist of The Swan Princess. He is Rothbart's animal form. Rothbart transforms into this form twice in the film; once in the beginning when he kills King William and kidnaps Odette, and at the climax where he fights Derek. The Great Animal himself is a hybrid with the head of a wolf, the wings of a bat, the talons of an eagle and the tail of a lizard.

The Great Animal was the most feared creature in the kingdoms of King William and Queen Uberta. The creature was first seen briefly on the road leading from Queen Uberta's kingdom as King William and his daughter Odette were returning home after the engagement between Odette and Prince Derek had been cancelled. Rothbart caused the King's carriage to draw to an abrupt halt on the road as he stood defiantly in the middle of it, blocking their path. As the King stepped out to take notice of who was in the way, he recognized Rothbart after having believed he would never see him again after banishing him from the kingdom. To the king's dismay, Rothbart returned with all of his previous powers restored and quickly summoned his alternate form as the Great Animal and attacked the royal escort.

All this happened seemingly in the blink of an eye as William's guard captain returned to Derek's castle with news of the attack. During the storm that followed, Derek rode out in search of Odette. Instead, he found the aftermath of the Great Animal's attack, having left a destroyed carriage, missing guards and a mortally-wounded King William. The King spent his final moments, struggling to explain what happened and only managed to inform Derek that Odette was gone before dying of his injuries.

The Great Animal would remain the focus of Derek's mission to train intensely for the day when he would challenge the creature and save Odette. That time came when Derek tracked down Rothbart to the lake and demanded him to restore Odette's life after she fell victim to his curse. Rothbart's only bargain was that he would restore Odette to life if Derek could defeat him in mortal combat. This prompted Rothbart to turn for the last time into the Great Animal. The battle was intense, beginning with Derek drawing first blood when he cut the Animal's shoulder, angering his foe. Swearing he would not let Odette die, Derek watched on as the Great Animal ascended into the trees and out of sight. Moments later, he landed and broke Derek's sword in his jaws. While pinned under the Animal's feet, Derek picked up a rock and smashed it on the beast's talon, freeing himself. During the fight, Puffin remembered Derek's bow that had previously been thrown into the lake by Rothbart after he learned of Derek's first visit to the lake bottom during an earlier adventure in the area. Balling up Jean-Bob, Puffin threw him headlong towards the lake to retrieve the bow.

Meanwhile, Derek fought off the Great Animal with a tree branch. At one point, Derek was carried high above and dropped a few times, first against a tree trunk and then he fell to the ground, knocking the wind out himself. The Great Animal was biding his time, circling overhead like a vulture, while down below, Jean-Bob had successfully relayed the bow to Derek, and with a few comical slaps to the face, revived him in time to see the approaching Animal flying down for the kill. Instinctively reaching for an arrow that was not there, Derek realized he could not make use of his bow. However, he soon heard the familiar panicking mumbling prayers of his faithful friend Bromley behind him across the lake with a bow and arrow set. Brom fired directly towards his friend and the Prince used his "Catch and Fire" technique to catch the arrow before it struck him and then aimed with dead-on precision at the incoming Great Animal.

Halted in flight at the shock of the shot to his chest, the Great Animal plummeted into the lake wherein Rothbart's sorcery was undone and as agreed, his spell of death over Odette was lifted, restoring her life.

In The Swan Princess Christmas, after Rothbart returns from the dead, he becomes the Great Animal again and battles Derek. However he gets defeated when Odette shows her Christmas spirit by singing "Season of Love".

Community content is available under CC-BY-SA unless otherwise noted.
Advertisement